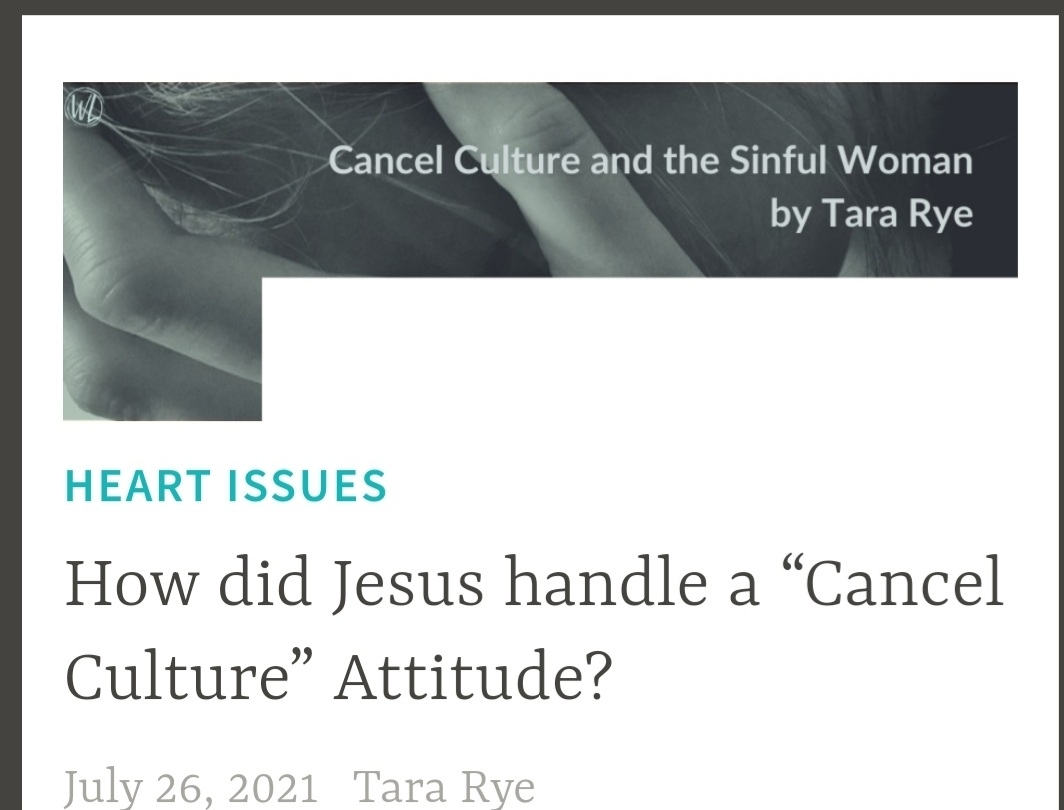 I discovered first-hand that, in this world, we tend to “cancel” people much too quickly. I had just  given my testimony to my Foundations seminary class. I was terrified to share what I had because it was raw and pretty messy. It was my first time to tell my painful story and it was to a room full of ministry leaders I highly respected. I wanted their approval.

I didn’t receive it. I experienced the pain that comes when someone “cancels” us because they judge us unworthy to be included. That day, I learned a lot about feeling ostracized. Once I shared the truth of who I’d been before Jesus changed me, people who talked to me regularly began to avoid me. They’d awkwardly walk away or turn before I could seek engagement. It was my first harsh encounter with being “canceled” because my story did not lend itself to a pretty Christian testimony. I had never been shamed for past decisions like I did that day. It hurt so much and made me feel ashamed, even though I was walking in freedom.

And do you know what? Being “cancelled” hurts even more when it comes from those who should be helping us with forgiveness and healing.

“Cancel culture” is practically an accepted part of life now. It happens when a group of people ostracize someone because they’ve done something that is perceived as socially wrong. It’s a large-scale way of using shame to pressure the person to “do the right thing.” While there is some value to cultural norms of right or wrong, the dark side of “cancel culture” happens when a person or a group of people place themselves as the arbiter of right and wrong and do not allow room for the “transgressor” to  find forgiveness or redemption. Worse, when attitude becomes anonymous and widespread through social media, it breeds fear, which then lends to a very unhealthy cycle.

Do you know what really bothers me about “cancel culture”? If someone steps “out of line” or is “outed” for a decision made today or even years ago, they’re immediately deemed unworthy. Nothing matters but that one word or act. Over. Done. The person being “canceled” is given no place to find community.  No opportunity to know the gift of forgiveness, and no way to be embraced into a welcoming experience that begins the process of healing and restoration that leads to redemption. When this happens, we’ve missed the mark.

It’s terrifying.  But as I read the story of the sinful woman who wiped Jesus’ feet with her tears, I realized that “cancel culture” is not new to us (Luke 7:36-50).

It was common in Jesus’ day for wealthy patrons to invite a visiting rabbi to their house to teach. Even though a person may not have been included, they were still welcomed to attend, but they weren’t permitted to speak. It was kind of like going to a theater. The uninvited guests would encircle the dinner party and learn from the teacher as an observer. In a way, it was an opportunity for the host to be pious and generous to the more unfortunate in his community.

A dinner with a rabbi was the social media of the day. It was the best way to get a message out because all levels of society were in attendance. Dinner parties were used for moral reform just like our social media is today.

I imagine this scenario: when the sinful woman heard that Jesus was at Simon’s house, she grabbed her alabaster jar,  showed up as an uninvited guest, and stood behind Jesus. As she listened to Him talk, she heard about the forgiveness of sins and believed. She believed so strongly that she couldn’t stop the tears from flowing. Before she realized it, her tears were covering Jesus’ feet. She knelt down to dry His feet with her hair. Her new understanding of the gift of forgiveness and that she was welcomed in His community were so profound that her worship bestowed little kisses on His feet in gratitude. Maybe she was lost in the spirit of welcome that she received in Jesus’ words as healing and redemption took hold in her spirit. One thing is for certain, she couldn’t contain her thankfulness.

But not everyone at that dinner behaved like Jesus did. They disparaged and spoke poorly of her and her actions. Consider that the Pharisee was the religious leader. He was the very person in the community who should have been offering the spirit of welcome to those that needed to know God and move toward God’s plan.

It’s the same today. Where does “cancel culture” begin? Just like in this biblical narrative, it starts in one person’s heart and, if not dealt with appropriately, will be taught in whatever our culture considers the appropriate place to do mass social moral reform. “Cancel culture” moves one person’s thoughts to a group of people who want to belong, so they willingly cancel a person in hope that they will find their place.

With the Pharisee, Jesus couldn’t let this teaching opportunity go!

Notice how Jesus confronted Simon. He didn’t shame Simon by telling him he messed up. He didn’t “cancel” Simon the way Simon had the woman.  He actually modeled forgiveness and acceptance as He taught!

Jesus began with a statement. “Simon, I have something to share with you.” In the Middle East this meant that He had something important to say. He then shared a short parable about two men that had debts. One man had owed 50 denarii (one’s days wages) and the other 500 denarii. “If both were forgiven their debt, which one would love his master more?” Jesus asked.

Simon, tentatively, stated, “I suppose the one with the greater debt!”

Jesus then used the woman as His visual aid. “Do you see this woman?”

Recognize this! Jesus wanted Simon to see her! He needed to notice her! Not who she had been, but who she was now!

Why? It’s very hard to cancel someone you have taken the time to see!

Jesus then compared Simon’s actions to the sinful woman. Both revealed what was in their hearts. The opportunity for redemption came to a climax. The woman who had been “canceled” as sinful was elevated and given forgiveness, redemption, affirmation, and peace because she demonstrated faith in Jesus.

Why? I honestly don’t know, but I can’t help but wonder if this might give us the opportunity to dwell upon Simon and realize we might have the same attitude in our hearts.  This must be dealt with so that we can stop the “cancel culture” phenomenon that seems to plague us. Simon becomes our reminder that our thoughts lead to actions. The only way to truly change our culture is to begin with our own thought life. We are the ones that need to change!

How have you experienced “cancel culture”? In what ways might you need to deal with “cancel culture” thoughts in your own heart? Who might need to know that they are welcomed in your community so that the process of forgiveness, redemption, healing, and restoration might take place? Who in your life do you need to stop and just see?

First published at:
How did Jesus handle a cancel culture attitude?
Posted by Simply Tara at 5:19 AM